This Friday, Dec. 13,  you’ll be able to act out your Star Wars fantasies at a Lightsaber Invitational starting at 5 p.m. on the Ithaca Commons.
During the invitational, Ithaca Sabers, the community’s own lightsaber combat training group, will be on the Commons to offer LED-lit lightsaber combat training demonstrations and lessons culminating with an invitational tournament featuring the best martial artists in the region.

“I’ve been looking forward to the lightsaber event ever since we first started planning this festival,” says Scott Rougeau, special events director for the Downtown Ithaca Alliance, the Winter Light Festival organizer. “The Ithaca Sabers are a group that is unique to the community and the combat training they provide is a fantastic activity for the whole community to enjoy. Ithaca’s Sabres use polycarbonate lightsaber replicas, they’re completely safe for children to wield. So, bring the whole family out and let them feel like a Jedi or Sith for the evening.”

After you learn proper lightsaber combat techniques stick around to watch the Ithaca Sabers compete in a thrilling and highly competitive LED lightsaber tournament. Plus, attendees are welcome to enjoy beverages at the Glow Bar. 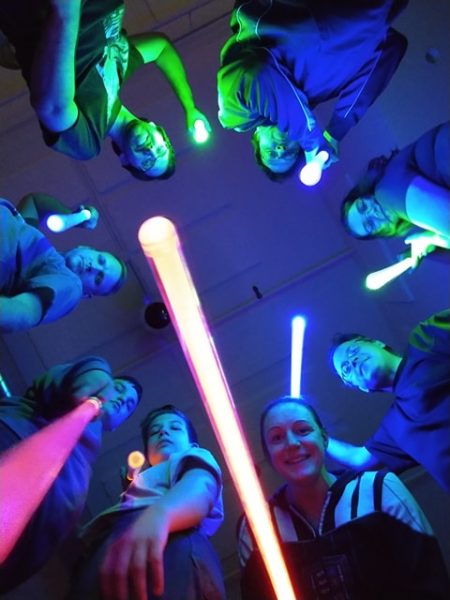 Then, on Saturday, Dec. 14, head back to Downtown Ithaca for Let’s Glow Ithaca, an extreme community glow party, where participants are highly encouraged to come dressed in their brightest, most colorful and luminous gear and watch a bicycle light parade led by Ithaca’s own Sparky the Unicorn, an art bike that resembles a unicorn and glows.
Let’s Glow is happening from 5 – 9 p.m. on the Commons. Glow sticks will be provided to guests (while supplies last).
Also, as part of Let’s Glow, you may have your picture taken with Sparky, enjoy beverages from Lucky Hare Brewing Company and Treleaven Wines at the Glow Bar, watch a carolers performance and check out the Prismatic by RAW Design, a world-class light exhibit on the Commons.

“A light festival wouldn’t be complete without a big party with tons of glowing lights, a sparkling unicorn, and a festive parade. It’s simply the perfect way to close out our first-ever Winter Light Festival,” says Rougeau.
The Lightsaber Invitational and Let’s Glow Ithaca are part of Downtown Ithaca’s Winter Light Festival presented by Tompkins Trust Company and supported by City Centre Apartments, Hilton Garden Inn, and Maguire Hyundai Subaru and the Tompkins County Tourism Program.
For more information about these and other Downtown Ithaca events, visit downtownithaca.com.

ABOUT THE DOWNTOWN ITHACA ALLIANCE: The Downtown Ithaca Alliance is a not-for-profit organization charged with the revitalization, development, promotion, and management of downtown Ithaca. For more information, visit downtownithaca.com.

ABOUT PRISMATICA: The Prismatica art installation was created by Toronto-based architect and design group RAW Design in collaboration with ATOMIC3, produced by Quartier des Spectacles Partnership of Montreal, Canada and will make its debut December 5 through Dec.15 as part of downtown Ithaca’s inaugural Winter Light Festival being organized by the Downtown Ithaca Alliance (DIA).

You have Successfully Subscribed!

You have Successfully Subscribed!